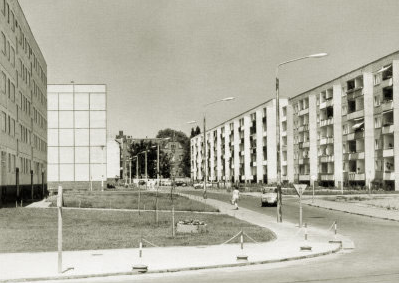 A Panzerberg, an artillery range, a neighbourhood, the Saturday-afternoon-view over the countryside from atop the 1st to 14th floor. The paths from house to house. A legend. We never knew everything could turn nameless again so quickly.

Instead of disappearing with the places, we moved on, stole away (or so it must have seemed to the places). We were faster than them, and we were more inconspicuous when we left. The places couldn’t match our speed of departure. For a while, they waited for somebody to walk through them again. But people stayed away. So the places waited until the land closed over them again. Our lives are longer than theirs.

The abandoned places. It’s always hot (it’s always summer), the grass stands high, the bushes, the grass, rampant nature—indifferent—engulfs those silent abandoned buildings. And nowhere a sea near the places that wait. That wait, even though they’ve disappeared, always in the land’s overheated interior. Something else, just as invisible, waits there too. When something disappears, it creates a square in the landscape, sometimes a circle.

We often have to ask for directions. Girls lead horses through the grass, but they don’t know anything. We look around this Steppe—this landscape upon which, in another era, people took their daily walks. Stairs, entryways, box-like rooms: and the view through glass from room to identical room. Now, we wander over empty surfaces of stone and concrete, to places nobody goes anymore. Aimlessly, we wander across vast areas that people had been removed from, no: they removed themselves.

At first we said: we won’t take another step here, nothing, no love, no death, not even a conversation. We said, we can’t stand them, these places. Their wretchedness, their ugliness, their bleakness. Nothing was exuberant. And yet, here is where we always returned. And suddenly we’re gripped by the horrifying thought that, we, too, might disappear from the world along with them.

The ugliness first became apparent when people removed themselves from them. A monstrosity that distorted everything else. We come back and discover—now that the people have gone missing—we discover a cemetery that had stood across from them, it’s much older than they are, and it had always been there, surrounded by green, brick walls, and singing birds. But it doesn’t interest us. Where once there had been a building, a school, a laundry, there now lies a field. We trace shapes in the air; we stand there, waving our arms in space, drawing floors, stairwells and balconies into this silent, motionless season. And sometimes when we walk across the field, through dense shrubs, we feel the absence of what might have been and are tired.

Those places don’t speak. Not any more. At first we thought they had preserved our stories inside them. But that’s not how it was. They remained silent. And when we returned, that’s exactly how we were. But we try anyway: we think we can transplant ourselves there. And come back, come with our words, colours, stories. But the places have turned away.

We understood: It’s not because everything is shattered; the glass, the doors or because everything is left open now that these places are injured. Not this. Not because everything is blind, lightless, the street lamps ripped out, askew. Or that we have to climb over concrete planks and weed-choked ditches like in the beginning. That instead of people, animals now inhabit homes. Rather it is because we have disappeared from them. Because they were denied what had been intended for them. Because in their concrete stiffness, they allowed themselves to become overgrown, and we abandoned them to story-less space.

Later we vowed to ourselves, even though we didn’t have a choice: that when we talked about the places, we’d do so sparingly, sparing with colour, with light, with words. Sparingly, so that what disappeared—our lives—can enter and leave through the gaps.

We watched. The people left and they took the stories with them. They took everything from the houses. A certain wind goes through them, every day a wind. No more than a meteorological phenomenon. Of course, we know.

Now we’re beginning to get it; it is we, who are the ones left behind.

We have long since departed. At first we thought, because we were burning to travel. But in truth, it was because it troubled us that ugliness disappears, yet leaves a trace. Meanwhile, we sit in all the cities of the world, feeling like the last people on earth who have ever experienced such a thing. Far below us, cars and trains swell the highways, they flood the canals, forests are felled and in the throng, houses are piled high- five, six new lives packed into every abode. And above it all, networks of streetlamps light up, illuminating illuminated windows.

We remain silent. What does this time know of another?